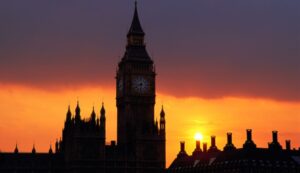 UK crowdfunding platforms have raised over £2bn for investment in green projects, representing investments by more than 20,000 individuals.

London is the world’s carbon trading capital with an 85% market share, and the UK is discussing the possibility of linking EU and Chinese trading emissions schemes post-2020.

Six renewable yieldcos have listed in London since 2013 with a collective market capitalisation in excess of £2.2 bn.

There are 39 Green Bonds listed on the London Stock Exchange in seven different currencies, including the first CNH and INR-denominated green bonds.

There are 38 green companies which have raised $10 billion combined in London, including 14 renewable investment funds.

In the UK renewables generation has increased by 30% since 2014. 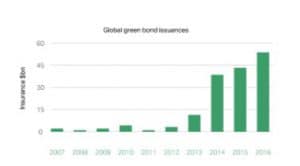 What is green finance?

How has the market developed?

The history of green finance

‘Green’ products have been promoted for decades. Emissions trading was first considered in the 1960s. Creation of the modern green finance sector, however, began with issuance of the world’s first green bonds in 2007. Green finance products should be regarded as thoroughly twenty-first century.

The sector is not limited to green bonds though they do represent its vanguard considering their relative liquidity, high profile and simple structuring. They are increasingly sought by investors who once passively divested of high-carbon assets (e.g. oil and gas stocks) but now actively seek to learn about and obtain low-carbon products. Green assets provide a means of countering the increasingly high-profile divestment movement.

The future of green finance

Momentum in the sector is likely to increase following COP21’s commitment to a two-degree ceiling. Countries also submitted their climate action plans (or INDCs) at Paris and must now begin to implement them – green finance will be a key to their realisation. In China alone, and despite having by far the world’s largest sovereign reserves, 80% of climate mitigation projects must be funded by the private sector according to the PBoC.

Regardless of one’s position on the science of climate change, public health concerns are increasingly at the top of domestic agendas. New projects, e.g. addressing air pollution in Beijing, or flooding in Cumbria,  can be financed by green issuances.

Why are green funds preferable to conventional funds?

Green instruments benefit not only the environment but issuers too, typically broadening investor bases, maximising order books and tightening prices. The demand for TfL’s inaugural green bond in 2015 was so great that the agency secured its second-lowest cost of debt capital yet and tapped an entirely new cash pool. Fully 69% of the bond’s investors were green-only funds, many of them first-time investors not just in TfL but in sterling markets entirely.

Green investors include not only environmental-specific funds (though the assets they command are larger and faster growing than you might expect), but mainstream asset managers and institutional investors too, attracted by the integrity that transparent, fully accredited green products provide and who covet their value as a hedge against carbon-related risks.

Many asset owners, from pension holders to millennial investors, are demanding climate-conscious portfolios. This trend is not expected to dissipate, with ever greater ethical demands being placed upon the financial services sector. Green finance provides one of the chief vehicles for meeting such expectations.

What are the international challenges?

Green definitions diverge sharply between countries. Emerging markets, for example, operate on a far longer time-scale than Europe. Even neighbouring countries will disagree about the role of nuclear or the acceptability of clean coal. As long as the financial products that facilitate the transition to a carbon-neutral economy are transparent and fully accredited however (i.e. they adhere to the ‘green principles’ outlined above), investors can choose for themselves the assets that suit their ethical parameters and the market will price instruments accordingly.

What is the Green Finance Initiative doing?
Our current work includes: